Victoria was born to a noble family. She and Isabel were born to Moira by the Rite of Azjora. Having inherited Moira's strength, Victoria possessed astonishing talents in combat from an early age. As a result, the Angels all knew it was only a matter of time before Victoria would receive her Divine Arma and become a true Angel.

It was not long before the two sisters were recognized by the Divine Edge. Isabel became the Angel of War and Victoria became, appropriately, the Angel of Victory. Perhaps most astonishingly, the Divine Edge granted both the Dawn Sword and the Dusk Shield to Victoria. There had never before been an Angel who had wielded two Divine Armas. 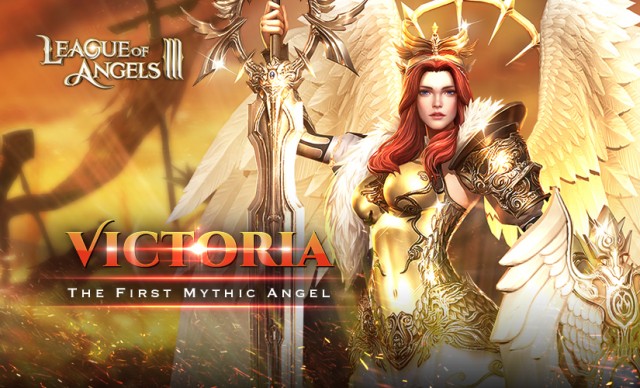 With her two Divine Armas, Victoria quickly became the most powerful of the Angels. She didn't lose a single battle and was successful in every endeavor. She was truly worthy of her title, the Angel of Victory. The Angels put their undying faith in her, as she stood out in every way.

To commemorate the Creator and the Nine Travelers, the Angels chose nine of their own, each the strongest in their own way, to become members of the "Nine Divine." Victoria was chosen to receive the title "Glory," and was the candidate for it. Given her reputation at the time, "Glory" was a well-deserved title.

Under the leadership of their leader, Ragnarok, the Thirteen Titans tore through the Twisting Void and attacked the Angel homeland of Elysia. They appeared near Elysia's fourth moon. Victoria herself volunteered to fight them and with Asherah's blessing, took command of the Angels and led them into battle against the Titans.

Her older sister's admonishment left but a tiny ripple in Victoria's heart. This ripple was soon fully engulfed by the rush of battle. It was not long before Victoria paid a price for her contempt: they were encircled by the Titans, and Victoria watched as her fellow Angels were slain one after another by the Titans' axes.

Victoria's underestimation of the Titans before the battle made Isabel uneasy. After seeking advice from Asherah, she personally led an army to the fourth moon to back up Victoria's forces. When she arrived, however, she discovered that Victoria's forces had been completely wiped out. She saw only the corpses of her fellow Angels, and her sister standing in the middle of a circle of Titans.

Isabel rescued Victoria, but the massacre of her fellow Angels would haunt Victoria for many years afterward. Meanwhile, the Angels began declining in power rapidly, and many of their moons were destroyed. Asherah reappointed Isabel as the commander of their forces, but even her strategies could not turn the tide of the war.

The Thousand Years' War ended with the Angels' crushing defeat. Aurora split open the fabric of space, allowing the Angels to cross the Bridge of Aurora and escape Elysia. Victoria put the blame for Elysia's destruction and her people's retreat entirely upon herself. The Angels' defeat in the Thousand Years' War crushed her will to fight entirely.

Before, Victoria had never considered why the Divine Edge had granted her the two Divine Armas. At Isabel's urging, Victoria began to examine her Divine Armas, the Dawn Sword and the Dusk Shield. For the first time ever, Victoria comprehended the true intentions of the Nine Travelers.

Upon reaching Sapphire, the Angels held another ceremony to award Nine Divine titles. At this ceremony, Victoria refused the title of "Glory" and gave it to Isabel, who was calm. Victoria pulled herself together, and saw her path forward clearly. She would use her strength to try to rectify her past mistakes.

The masked ones taunted Inanna by summoning the avatar of Ragnarok and the Three Tyrants. Sapphire was engulfed in a dark energy, and Victoria saw this as a chance to redeem herself. With her two Divine Armas in hand, she resolved to do everything she could to protect the Angels and Sapphire.

Victoria was true to her promise and with her heroic efforts, the war was quickly brought to an end, with the Angels securing an overwhelming victory. Ragnarok's avatar was defeated, and the Three Tyrants were once again sealed beneath the Tree of Origin. Peace was finally restored to Sapphire, and Victoria regained her confidence.

But Sapphire's peace did not last long. Soon afterwards, the Black Dragon Prince Duan and Tabitha led the dragon armies to attack the city of Everlast, setting off a war between the dragon armies, and the combined forces of the Angels and the humans. Victoria picked up her sword and shield and little by little, fought back the dragon attackers, defending the territory of the Angels.

The war between the dragons and the Angel-Human alliance became long and protracted, but Victoria harbored no doubts in her heart. Her figure, sword and shield and hand, was like the light of victory, giving everyone in the allied armies the courage to fight. Victoria herself was sure - the Angels would win the war in the end.

Attack a column of enemies and has a chance to taunt them.

With the support of the Dusk Shield, Max HP will be restored at the end of every round.

When taunted by Victoria, enemies ‘ultimate skill cannot be released and only normal skills are available. In addition, their attacks are locked to Victoria.

Victoria can be obtained in the recent operation event, and her Hero Backstory will start from Feb 10th, please stay tuned!