Isolde: the Empress of Ice

Isolde, the Empress of Ice, founded the Frost Kingdom and dies at the hand of Luin Amakiir, the king of elves. 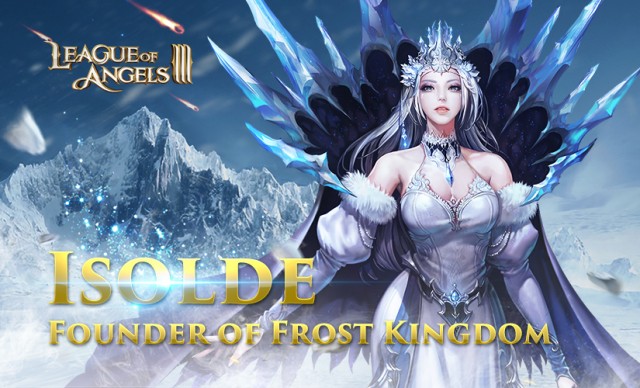 Born in Elysia and self-proclaimed as the Empress of Ice, Isolde is a pureblood angel who owns the Shadowfrost  as her exclusive Divine Arma. The look-like 30-year-old empress is 195cm high, wearing a crown of ice, holding the Shadowfrost and having the shards of ice behind her like a wall of frost. Because of her magnanimous, compassionate, perseverant and being good at governing and strategizing, Isolde creates the Frost Kingdom but has to accomplish the mission of protecting the national treasure "Eye of the Sky" and waits for its awakening. With the Frostborne lineage and as the strongest character in this kingdom, Isolde is able to Froze Blood and turn moisture in the air to ice, which helps her fight with the enemies, Angel of the Night Aunisi, Luin Amakiir. However, due to the fear of High temperatures and fire, Isolde finally dies at the hand of Luin Amakiir but left the motto" Eternity to the Frost Kingdom" to all the people.

Isolde was originally nothing more than a common Angel born in Elysia with a magical affinity for controlling ice. However, she was never powerful enough to achieve the status of a true Angel. During the Thousand Years War, she was bewitched by the evil Angel Aunisi and fled from Elysia to the distant Sapphire. From then, Isolde was ashamed at her cowardice and suffered greatly by losing access to much of her magic in Sapphire. To alleviate her pain, she withdrew to the frigid wastes of the Northern Tundra.

When she met an Elfborne Ranger Commander in her new home, the beauty and grace of the Elfborne eased her suffering. The two were soon married and created the line of the Frostbornes. One day, Isolde found the legendary Eye of the Sky from when the Angels first came to Sapphire, she then decided to atone for her past and had the Frostborne protect the artifact with their lives and wait for the Awakening. She and the Elfborne Ranger proceeded to unify the northern territories and create the Frost Kingdom with the aim of guarding the Eye of the Sky.

The Eye of the Sky eventually attracted the unwanted attention of Aunisi who took control of the Elven king Luin Amakiir and commanded his forces to attack the Frost Kingdom. Isolde sacrificed herself in order to protect the Frostborne and the Frost Kingdom from certain defeat.