The Most Powerful Ever! Chain of Justice Available in Angel’s Treasure.

The Relic system has been one of the most popular systems among players since its release. Various Relics have offered flexible combination and unique skills to players while adding enormous attributes to their heroes and even bonus attributes. Chain of Justice, which is said to be the most powerful legendary Relic ever, will outshine all the previous Relics and push the system to a whole new level. Check below for more details. 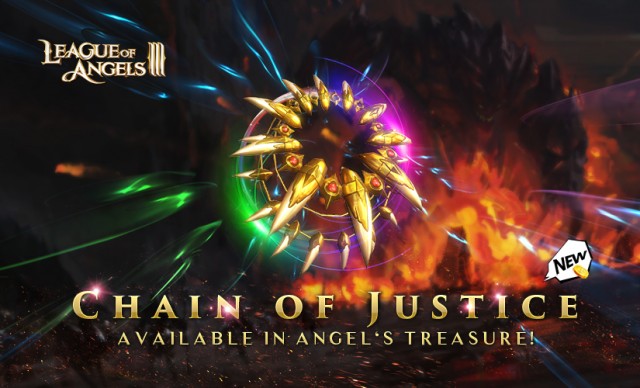 Relics benefit different types of heroes. There are currently two kinds of Relics in game: Relics that benefit ATK and Heal heroes and that benefit DEF and Support heroes. Players can check the types by clicking the icons on the right upper corner of the Relic panel. Chain of Justice, for example, is the legendary Relic that will add enormous attritubes to the ATK and Heal heroes.

Each Relic has their own skills. Some relics require the skills being set in Formation manually, while others are able to unleash the skill once they are unlocked. Abyss Core, the Relic that is frequently used in PvP battles, has a chance to curse an enemy and disable them to receive a buff only after it’s unlocked and is set manually in Formation. Chain of Justice belongs to the alter. The Legendary Relic has a chance to reflect the damage the ally receives back to the enemies once it’s unlocked. 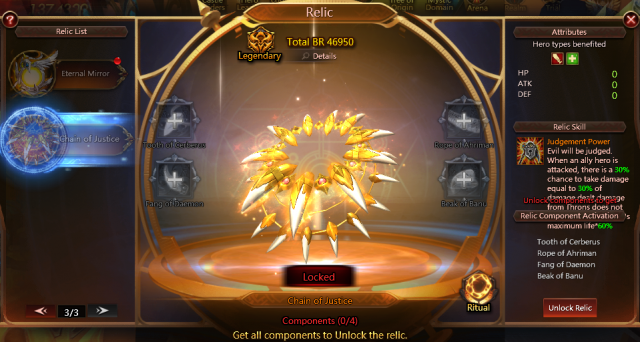 With the legendary Relic unlocked, the mass damage attacker in the squad will be able to relentlessly pierce the enemies and the healing heroes can protect the allies without worrying about getting severly hurt. Do you want to deal even more damage to obliterate your enemies? The choice is yours! 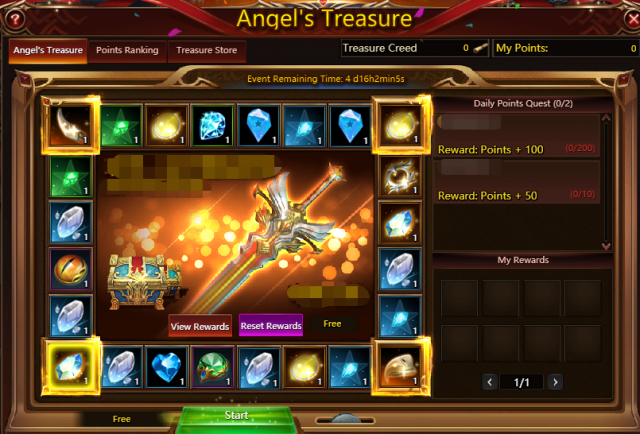 A brand new X-server event, Angel’s Treasure, will be available from Nov. 23th to Nov.25th. Players will be able to obtain Chain of Justice as the Theme Reward and various kinds of resources as Ordinary Rewards by spending special vouchers or Topaz to spin the wheel. Theme Rewards which are placed in the four corners of the rewards pool, are limited. When all the Theme Rewards are collected, players will be able to claim all the remaining rewards on the wheel.

Players are granted one attempt FOR FREE. They will receive a certain amount points and Treasure Creed as well as the rewards after one spinning. As it’s a X-server event, you’d better get as many as points as possible to rank higher and win better rewards like Epic Gem Combine Scroll and Lvl.6 Exclusive Gem Chest! The Treasure Creed can be used to exchange for materials in the Treasure Store, and will be emptied after the event ends. Make sure that you make the most use of your points and Treasure Store during the event!

*Final update will be determined in game.

We hope all players a very happy Thanksgving and seize the chance to get their beloved items in League of Angels III!