Soak up the sun and join players from around the world in enjoying this year’s summer festival. Following the great expansion to guild features, new decorations, costumes and events of the first week, Angels on the Grace Continent have prepared more in the second week and weeks to come in celebration of the annual carnival. A legendary mount “Summer Unicorn” will debut in the in-game events where players have a chance to unlock and then possess it for 10 days or permanently. The Carnival Week continues, and every new player in the 100th server will have a chance to RENAME the server. Plus, a new 3D game scene “Fairy’s Coming” and new cross-server features will be unveiled in the next update for the summer festival. Read on to snag the sneak peek. 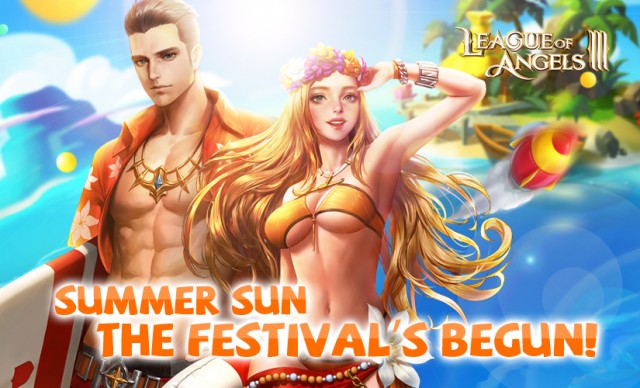 Reflecting purity and romanticism, the new mount is born to be a trendy. With the colorful wings and mystery purple eyes, the new mount Summer Unicorn impresses players at the first sight. The legendary mount will be available to all players in Wheel of Fortune from September 14th to September 16th. Take the summer celebrity with you while obtaining rare resources!

Immerse yourself in the summer fun! Starting from September 12th, you’ll be able to obtain the sigil to unlock the fabulous Summer Unicorn and possess it for 10 days, via just logging in game and completing certain tasks. Tame the dreamy beast, obtain tons of resources and enjoy the Carnival Week in League of Angels III!

We are excited to announce that the 100th server for League of Angels III will launch at 10 A.M. September 14th! To celebrate this special moment, we decide to make it truly your server. The player who plays on the 100th server and make it to BR King No.1 in the New Server Rank event will have the privilege to RENAME THE SERVER. Compete for the Soaring Star, warriors!

Get ready to step into the fairyland! Covered with scrubby trees, Fairy’s Coming is a land where the Elf settled after the Megaforest was occupied by the Half-elves. Through a thin summer haze, the violet mushrooms and unknown plants flourish well in the dreamland where exotic blooms showing themselves dazzlingly. More details about Fairy’s Coming will be unveiled soon!

Introducing the 5-star legendary hero and the first legendary Divine Arma which are sure to make your jaws drop, League of Angels III is pushing the formation and strategy to a new level! In the next week’s update, the new hero will not only assist the battles in the main tasks, but also be available in events where all players have a chance to obtain! Don’t miss them out!

In addition, cross-server features and fantastic events will be unveiled in the coming updates for the summer festival. Follow us on our Facebook fan page or check out the in-game new panel from time to time for the latest news!

Keep the summer vibe alive! We hope all our players will enjoy the summer festival and stay tuned for more great content to come!